School run behaviour: how one mother changed hers

School run behaviour: how one mother changed hers 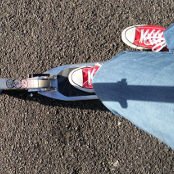 Anne, a working mother with two small children, relied on the family’s second car. When the time came to change it, they had a decision to make: fork out for a new one or try and get along without it.

Six months later, they are healthier, happier and financially better off. Anne’s story is one of how a little incentive can help someone make positive changes to their behaviour.

Anne lives in Reading and is married with two boys aged seven and nine. The family has always had two cars. Anne’s husband Ben is part of a car sharing scheme run by his employer and takes two co-workers to work each day. Anne relied on the other car for the school run, local errands and as a safety blanket in case she needed to drive somewhere.

Anne says, ‘We live just over a mile from school and would usually drive there, sitting in traffic for some of the way, feeling stressed and then struggling to park’.

When they did leave the car at home her children would use their scooters to travel to school, with Anne walking behind and rushing to try and keep up but, in fact, slowing them down.

She bought herself a scooter too and, since then, the three have scooted the commute daily. ‘It has been brilliant,’ says Anne. ‘We have a lot of fun getting to school, the boys arrive red-faced, clear-headed and happy having burned off some energy and got a lot of the fidgets out of their system!’

The children leave their scooters in the racks at school, take their helmets into the classroom and Anne turns around and scoots home. She scoots back to school to collect the boys at pick-up time.

‘Our second car was mostly used for short journeys which isn’t good for the car, the environment or air quality,’ Anne told me. ‘We decided that we’d take positive steps to use active and sustainable travel for the same journeys.’

And the family has saved a substantial amount of money by not having to tax, insure, maintain and fuel a second vehicle.

Giving up the car wasn’t an altogether easy decision though. ‘I had quite an emotional response to the idea of giving up my car.

‘For so many years of my life having my own car has been a symbol of independence, freedom, of adulthood and being able to go where I choose. I guess that’s what the car companies want us to think! I wasn’t sure whether I wanted to let that go.’

She also discovered that there is a car club vehicle just around the corner from her house, meaning that she does have access to a shared, low cost vehicle if necessary.

‘In the months so far I’ve only used the Co-Wheels car once to take my son to a medical appointment. It was brilliantly easy and cost less than a taxi. It’s great to know it’s there as a backup. But primarily we scoot – even if we need to go into town after school we scoot there and get the bus home.’

Anne has also seen her fitness levels increase and has toned up and lost a bit of weight.

‘As a busy working mum I found exercise hard to fit into my life – by the time the kids are in bed I just didn’t feel like going out to the gym, so this is the perfect answer for me – I get at least 50 minutes of physical activity a day and it doesn’t use up any more time than I previously spent driving the kids to school and back!

‘We leave the house at the same time we left when we drove and arrive at school at the same time, if not earlier. I know we’re not contributing to air pollution and we’re actually breathing in better air scooting than being in the car.’

The family has no plans to replace the vehicle – and far from feeling deprived of her car, Anne feels the decision has led to some really positive outcomes for all of them.

‘I really would encourage anyone thinking about ditching the car for even part of their journey, to do so,’ says Anne. ‘It has been brilliant for us in so many ways.’